When in August 1945 the Nicolaus Copernicus University was established – with only two faculties: Humanities, and Mathematics and Natural Sciences – by the Delegate of the Ministry of Education, University rector prof. Ludwik Kolankowski made efforts to obtain permission from the ministry to establish a third faculty, highlighting the need to provide Pomeranian residents with access to law studies.

As early as October, an official announcement about enrolment in the Law and Economics Department appeared, although the ordinance on its creation was not issued until November 25, 1945. The building of the former Provincial Savings Bank was allocated for the purposes of the Department, which was given the name Collegium Minus (it is commonly called “Harmonica”).

From the very beginning the Faculty began working on four years of study, enabling those students whose education had been interrupted by the war to continue their education. In the first year alone, 585 students were enrolled. The lectures started at the end of November; however, for a long time a lot of effort and commitment was made to equip the faculty rooms and establish the book collection.

At the beginning of 1946, the inaugural meeting of the Faculty Council was held and the first dean authorities were elected. The dean was prof. Michał Wyszyński – head of the Department of Church Law. He held the position of deputy dean from the following academic year until 1953, while the dean was prof. Władysław Namysłowski – head of the Department of the Law of Nations.

During the first year of teaching, the pre-war curriculum was used. Later, apart from traditional subjects, the curriculum included new ones: labour law, religious law, and forensic medicine.

Moreover, in the years 1945-1948, the Faculty was affiliated with the School of Law and Administration in Olsztyn. This was the precursor to a later degree programme in administration.

The original idea of education at the Faculty, also in the field of economic sciences, turned out to be impossible to implement due to the lack of specialists in this field. At the beginning of the 1948/49 academic year the Faculty was renamed the Faculty of Law, maintaining the Department of Political Economy and relegating economics to one of the subjects within the law curriculum.

In 1951 – during the attack by the Stalinist authorities on the scientific community – the ministry decided to suspend enrolment in the Faculty. Two years earlier, a three-year study programme was introduced in place of the four-year one, so when students enrolled in the 1950/51 academic year left the university the Faculty’s activity was interrupted. The requests made by the University and Faculty authorities to the minister remained unanswered. 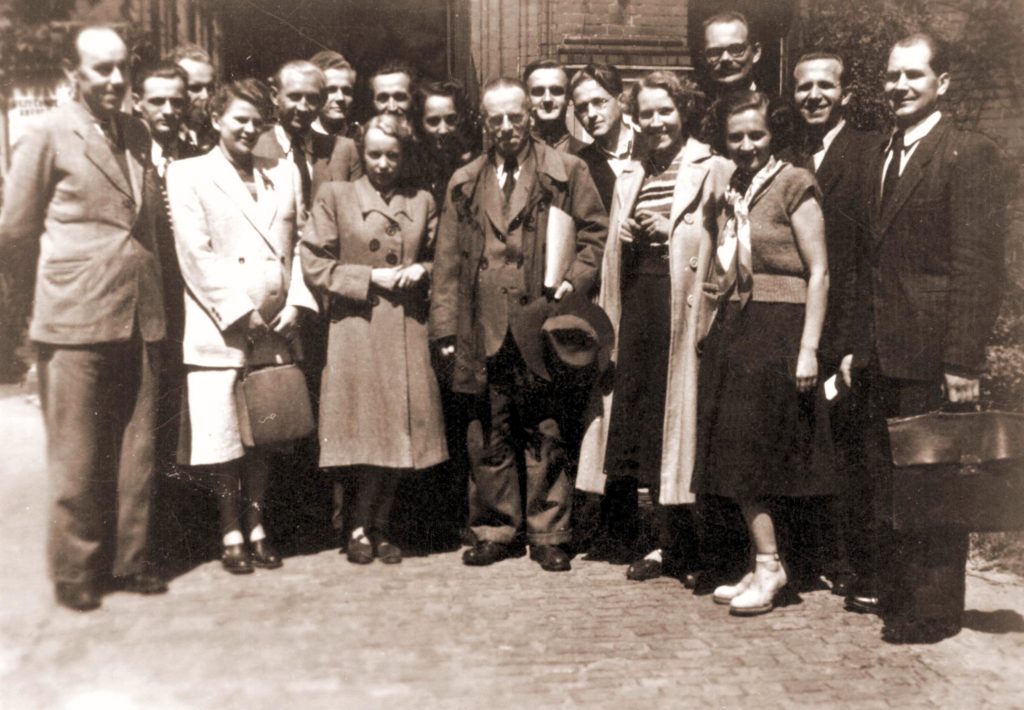 By 1953, 1,099 Masters of Law and 316 first-cycle law graduates had left the University. At the same time, 24 doctoral dissertations were conducted at the faculty. The obvious result of the liquidation of the Faculty was a significant restriction of access to law courses for the inhabitants of Pomerania. The political “thaw” of October 1956 offered an opportunity to restore the Faculty of Law, and the efforts undertaken by the University in the Ministry of Higher Education ended with success. The restored Faculty was relocated at Collegium Minus, heads of departments were appointed, and in the spring of 1958 the Ministry officially announced the resumption of the Faculty of Law for the 1958/59 academic year. The interest in taking up studies at the reactivated Faculty was so great that the number of candidates exceeded the admission limit set by the ministry almost three times; 90 people were admitted for the first year.

Some of the employees from the first period of the Faculty’s existence returned from other university centres, including prof. W. Kornatowski, prof. J. Śliwowski, and prof. Wojciech Hejnosz from the Faculty of Humanities, who was particularly distinguished in the work on reorganising the Faculty and who was also elected the first dean of the reactivated Faculty of Law. In 1960 his place was taken by prof. Wacław Dawidowicz, head of the Department of Administrative Law.

At this point, the reorganisation of the Faculty proved to be difficult. For example, there were issues with book collection for individual departments, and there was a shortage of rooms (the building had to accommodate the departments of geography and the Faculty of Fine Arts, the NCU bursary, and the Military School). These and other difficulties did not prevent the opening of a new degree programme in 1961 – administration – within the framework of the Vocational School of Administration, thus providing extramural education. They also did not prevent the establishment of the NCU Student Lawyers’ Science Club, as well as the Inter-faculty Penitentiary Club, which were both able to boast significant achievements on an immediate basis. 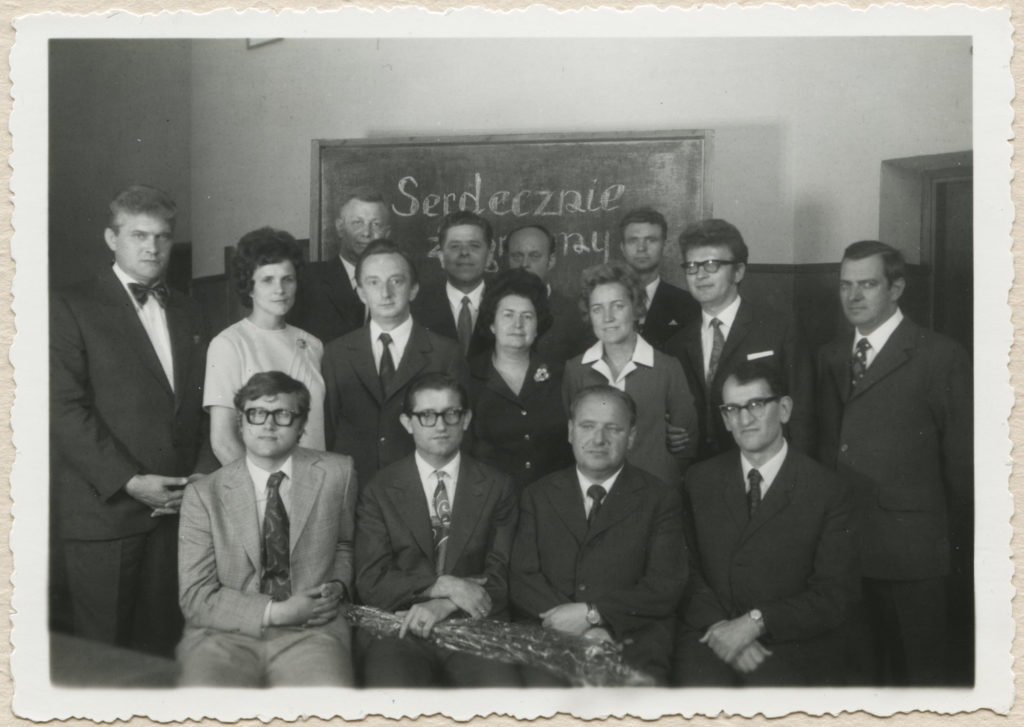 The first group of 69 masters left the university in 1963, while the Faculty gradually increased the number of students admitted at the same time. At the beginning of the 1960s, the number of law students alone was close to 700, only to exceed this level in the following years. These numbers were augmented by students at the Extramural Law School, launched in 1964/65. The establishment of an extramural law programme at the NCU was of great importance for the entire region of northern Poland.

In the subsequent years, the deans were prof. Aleksander Kunicki (from 1965 to 1967), prof. Jan Krajewski (from 1967 to 1969), and prof. Wacław Szyszkowski (from 1969 to 1972). After 1968, the state authorities initiated reforms aimed at centralising structures at all universities. Accordingly, for the 1969/70 academic year 15 previously independent units were liquidated under the banner of scientific and research undertakings and replaced with 3 institutes: the Institute of State and Administrative-Economic Law, comprising six units, the Institute of Judicial Law, including seven units (since 1971 – eight), and the Historical and Legal Institute, comprising four units. At this point, the name of the Faculty was also changed to the Faculty of Law and Administration.

In the early 1970s, despite the departure of several employees to the newly established University of Gdańsk, the number of academic staff increased. It therefore became possible to extend the scope of education in the field of administration; in addition to the existing Vocational School of Administration, a two-year extramural course (MA) began operating in 1971, and in 1972 this course became full-time. In the 1970s, the Faculty also ran a consultation service for extramural students of law and administration in Olsztyn.

In the 1970s, the function of dean was performed by prof. Czesław Jackowiak (1972-76), prof. Jan Głuchowski (1976-78), and prof. Andrzej Marek (1978-1981). During this period, the number of students steadily increased to almost 1,200 by the end of the 1970s, but in the years 1973-80 the full-time law courses lasted for five years rather than four. The Faculty equipment remained relatively poor, although in some areas (e.g. historical and legal) a large and valuable collection of books was already available, while the Department of Criminalistics could boast an impressive collection of firearms. A faculty library was consequently established, thus providing invaluable help for students.

The number of doctoral theses defended at the Faculty was considerable – over 120 papers from the moment the Faculty was reactivated. Postgraduate courses were also organised. From the mid-1980s, administration courses were conducted only as part of the five-year Extramural School Administration. Further increases were evident with regards to the number of students; the academic year 1991/92 their number reached 1,900, of which 1,181 remained in full-time courses. 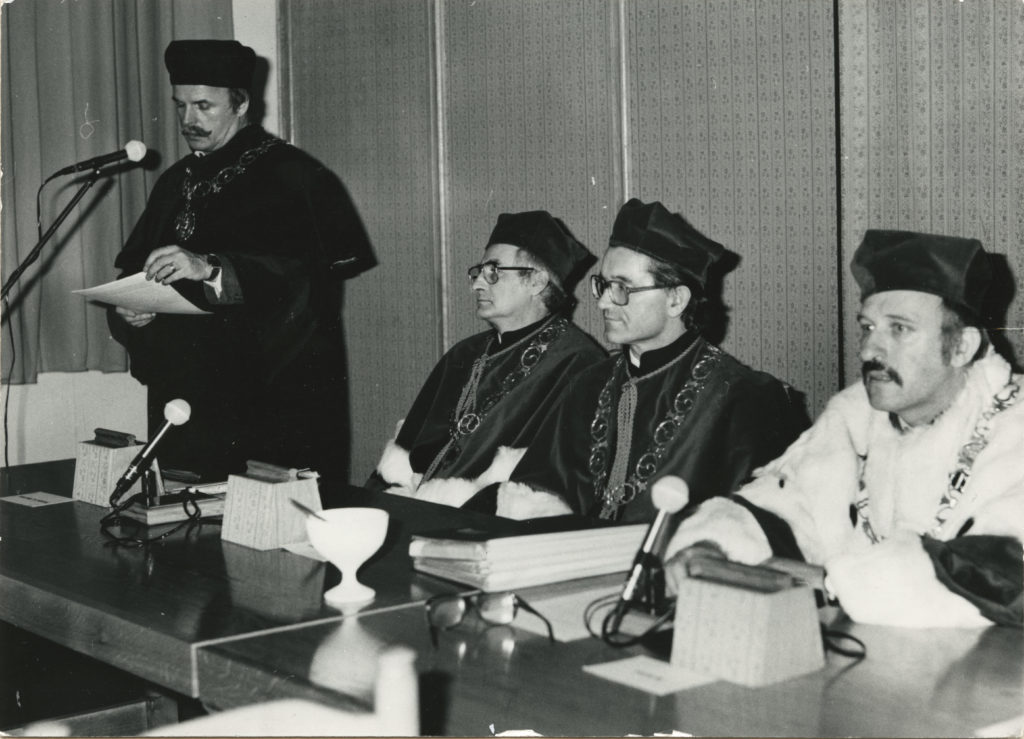 The 1990s sustained enormous progress in the development of the Faculty’s contacts with foreign countries – foreign scholars were hosted, scientific sessions were organised, and many academics were on scholarships and undertook scientific missions in some of the most remote corners of the world. These included Australia, Japan, the USA, Mexico, Italy, France, Germany, Great Britain, Finland, Spain, the Benelux countries, and all the countries of Central and Eastern Europe. Many young researchers had the opportunity to take advantage of scholarships awarded to them from the Irena and Wacław Szyszkowscy fund, which is still in place at the Faculty. Since 1981, 88 doctoral theses have been defended. An important change to highlight is that, by order of the Rector on 18 December 1990, the division into institutes and units was abolished; they were replaced by 24 departments, most significantly the separation of the Department of Canon Law and the Department of Human Rights and European Law. In 1996, the Budget Law and Local Government Finance Unit was established within the Faculty. The Maritime Law Unit was established as part of the Department of Civil Law and International Economic Trade in 2000, continuing the great tradition of research on maritime law in the Toruń centre.

From the 1990/91 academic year, a modern system of studies was introduced based on the principle of module optionality. In 1999, the Council of the Faculty of Law and Administration approved the European Credit System (ECTS). An increasing number of students having taken advantage of the scholarships offered by the European Union TEMPUS and SOKRATES / ERASMUS programmes (now ERASMUS +), therefore taking one-semester or one-year course at renowned universities across Europe. Through these opportunities dozens of students will complete the two-year English-language course in British and European law offered by the British Law Centre and the English-language Comparative Law Course. A large group of law students, taking advantage of the European Law Students’ Association (ELSA) Group’s dynamic operations, are undertaking professional internships in law firms, courts, and state offices throughout many European countries. 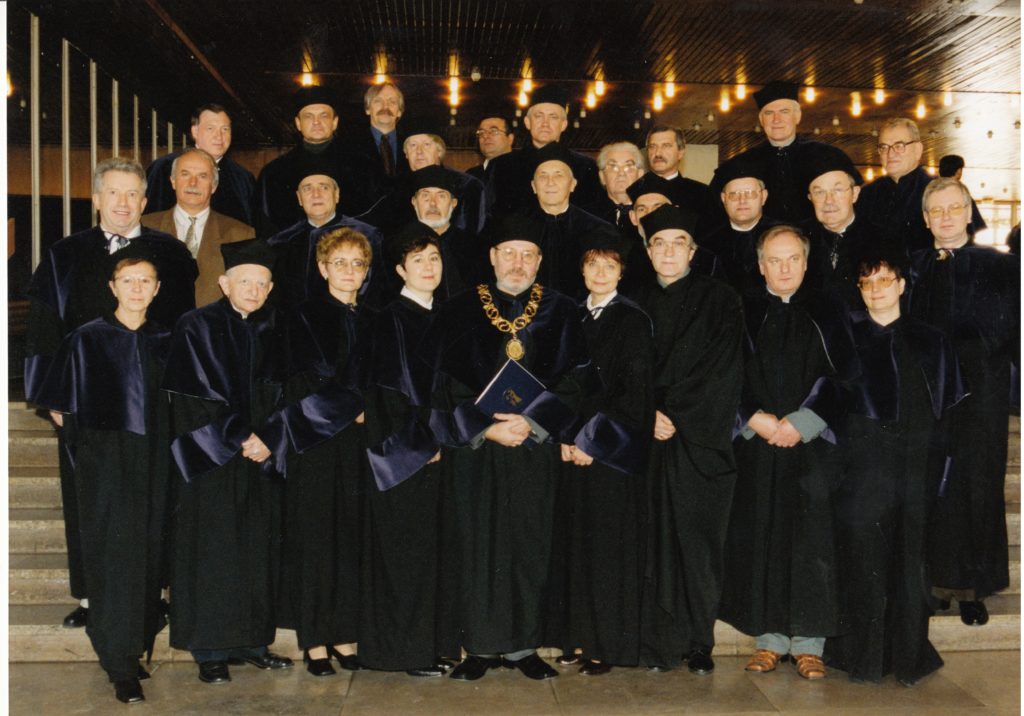 The funds obtained from the fees for legal studies were rationally and responsibly invested by the Faculty of Law and Administration in the construction of a new building. The promoters and builders of Collegium Iuridicum Novum were the former Rector of the Nicolaus Copernicus University, prof. Andrzej Jamiołkowski and the then Dean of the Faculty, prof. Ryszard Łaszewski. This task was the priority for the dean’s team, which was led by prof. Grzegorz Goździewicz, and then prof. Zbigniew Witkowski. The idea of construction heavily supported by funds from the state budget, as well as the extraordinary kindness of the new rector’s authorities with Rector prof. Jan Kopcewicz as their leading representative, really took shape in October 1999. The University completed the first stage of construction of the building of the Faculty of Law and Administration and, at the end of July 2000, the entire construction was completed. Situated on a 16,000 sq. m area surrounded by the beautiful Bielany pine forest, the inside of the building measures approximately 9,000 sq m. With its facade maintained in the architectural convention of “Harmonica”, the new building resembles the former headquarters of the Old Town Moat 1a (a view of the building is provided in the photo below). 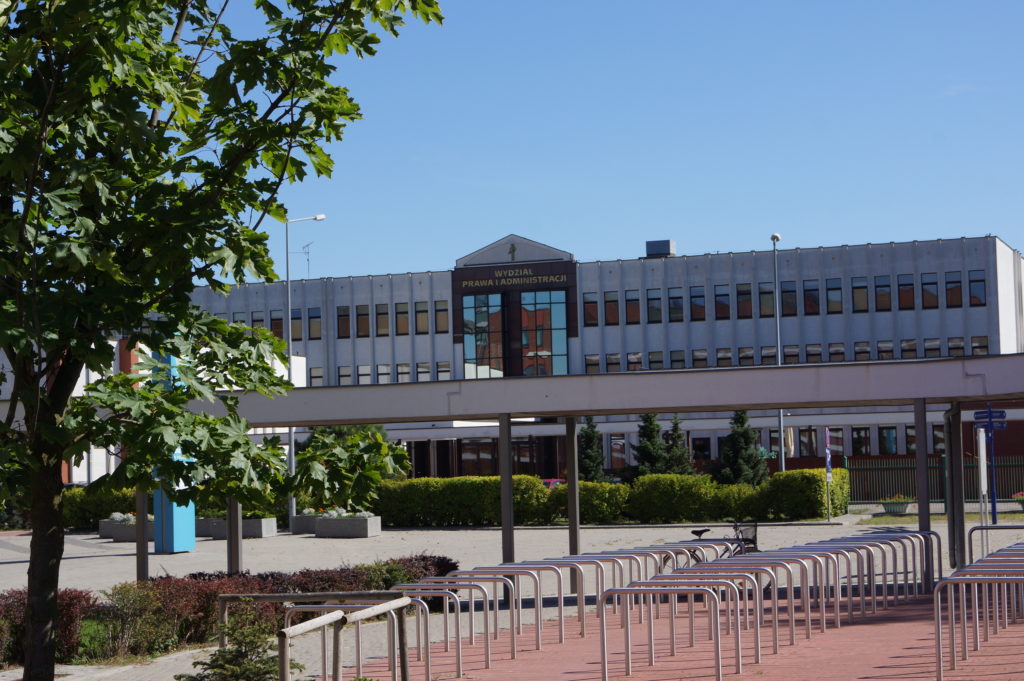 In order to provide a more holistic picture of the Faculty, it should be added that since the 1997/98 academic year the Faculty of Law and Administration has been conducting doctoral studies and many highly attractive diploma courses which have proved popular among students from all over Poland. The entire extensive didactive and teaching process (lectures, tutorials and seminars) is conducted by 96 academic teachers, including 11 professors, 27 habilitated doctors as professors of NCU, six habilitated doctors, 44 PhD graduates, and 8 MA graduates.

It is a source of satisfaction for the legal academic community in Toruń that despite the enormous teaching commitments that the Faculty of Law and Administration consciously assumed a few years ago, the pace of research has not slowed down. As a consequence, various employees have had successful publications.